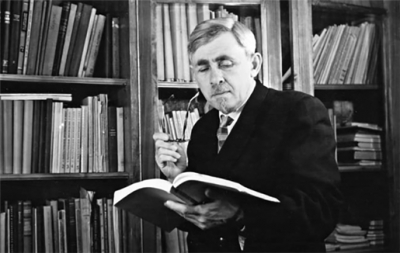 Naum Il'ich Akhiezer's father was the medical doctor for the district in and around Cherikov. The town of Cherikov, called Cherykau in Belarusian, had around 5500 inhabitants when Naum Il'ich was born. His brother Alexander Il'ich Akhiezer was ten years younger than Naum Il'ich and went on to become a famous theoretical physicist. Naum Il'ich attended the local  in Cherikov, graduating in 1918. Then he taught mathematics and physics at the Lemelsk school-commune for four years before beginning his university studies. Perhaps we should make clear that, following the Revolution, Ukraine did not have any universities, but it contained Institutes of Public Education which filled a similar role.

Akhiezer studied at the Kiev Institute of Public Education, entering in 1922 on a three-year course of study. However, he was an exceptional student and was able to complete the full course of study by December 1923 having taken around eighteen months. This is even more remarkable when one realises that he was also teaching at one of the local Kiev schools during the time he was studying at the Institute. In many ways he went far beyond what was expected of any student [6]:-

While preparing for the examinations he was also able, in this short time, to prepare resumes of a number of the basic courses; these were subsequently used by many students. His accelerated passage through the course did not prevent him from taking an active part in a number of scientific seminars. To this same period dates his first enthusiasm for the theory of , which he studied from the original memoirs of Jacobi in Latin. Subsequently he was to return several times to this theory, and to make masterly use of it in various problems of analysis. At the same period he began studying the celebrated doctoral dissertation of N E Zolotarev, and certain other work by classic native authors.

He met a fellow undergraduate Mark Grigorievich Krein who had entered the Kiev Institute of Public Education at the age of fourteen. Akhiezer and Krein became friends and around ten years later collaborated on mathematical projects. Akhiezer graduated from the Kiev Institute of Public Education in 1924. In addition to his school teaching, at this time Akhiezer was assisting Dmitry Aleksandrovich Grave by conducting practical classes for him at one of the Higher Educational Institutes in Kiev. Akhiezer became a research student of Grave's in 1925 and worked on his dissertation [6]:-

At that time Grave had begun to occupy himself with questions of mechanics and applied mathematics, and he led his pupils in the same direction. Akhiezer's research was on the theory of functions of a complex variable and its applications to aerodynamics. In March, 1928 he defended his dissertation 'Aerodynamical Investigations' (Ukrainian), which had appeared in the journal 'Trudy Piz.-Mat. Otdela Ukrain. Akad. Nauk.' We remark that it was in this paper that the formula was first given for mapping a doubly-connected domain, bounded by polygons, onto a circular annulus.

After undertaking research with Grave, in 1928 he joined the staff at Kiev University and the Kiev Aviation Institute and taught there until 1933. During this period he worked on the theory of functions publishing many papers in Russian, French and German. Examples of his papers from his time in Kiev are: On polynomials deviating least from zero (Russian) (1930), On the extremal properties of certain fractional functions (Russian) (1930), On a minimum problem in the theory of functions, and on the number of roots of an algebraic equation which lie inside the unit circle (Russian) (1931), and Über einige Funktionen, welche in zwei gegebenen Intervallen am wenigsten von Null abweichen  (3 parts, 1932-1933). In the first of these papers Akhiezer solved the problem of finding the polynomial with three fixed coefficients deviating least from zero on a given interval. This extended results by Chebyshev who had solved the problem for polynomials with one fixed coefficient, and by Zolotarev for polynomials with two fixed coefficients.

From 1933 Akhiezer worked at Kharkov University. There he joined the Kharkov School of function theory and soon became its leading member. He was appointed to the Chair of the Theory of Functions in 1933 and, two years later, was appointed director of the Mathematical and Mechanical Research Institute after Sergei Bernstein moved to Leningrad. He served as President of the Kharkov Mathematical Society for more than 25 years and was elected to the Ukrainian Academy of Sciences in 1934. Akhiezer had never been awarded a doctorate since academic degrees of Master of Science and Doctor of Science had been abolished in the USSR in 1918. However, they were reintroduced in 1934 and, in 1936 Akhiezer was awarded an honorary degree of Doctor of Physical-Mathematical Sciences. In around 1935, Kolmogorov laid the foundation for a new study, namely that of the extremal problem for a class of functions. In 1937 Akhiezer, working with his friend M G Krein, solved the extremal problem for the class of differentiable periodic functions. The two mathematicians collaborated on writing the book On some problems of the theory of moments (Russian) published in 1938. Akhiezer continued to work on this topic and was later to solve the extremal problem for the class of analytic functions. He published The classical moment problem and some related topics in analysis in 1961 (Russian, English translation 1965). A review begins:-

The moment problem is of importance in several areas of mathematics, e.g., certain problems of analysis such as quadrature formulas, , orthogonal polynomials, the interpolation problem for functions of a complex variable, quasi-analytic classes of functions and monotone functions, spectral theory of operators, etc. ... The present book serves as a solid foundation for the application of the moment problem to the above fields ...

During World War II, as his contribution to war work, he moved to the Alma-Ata Mining and Metallurgy Institute in 1941 where he remained until 1943 when he transferred to the Moscow Power Institute. He returned to his Chair of the Theory of Functions at Kharkov University in 1947. Between 1941 and 1945 he did not publish any papers but from 1945 onwards he was able to publish again with papers such as On some inversion formulae for singular integrals (1945), The general theory of Chebyshev polynomials (1945), On some properties of entire transcendental functions of exponential type (1946) and the book Lectures on the Theory of Approximation in 1947. This important book was awarded the Chebyshev Prize in 1949. Antoni Zygmund writes:-

This is an interesting and valuable book representing various aspects of the theory of approximation of functions in the real domain. ... The presentation is clear and elegant.

Andrey Kolmogorov, in a review of this book, described Akhiezer's monographs as:-

... masterpieces of mathematical literature, combining width and clarity of general conception with virtuosity in the handling of details.

The book was translated into English and published in 1956, being reprinted in 1992.

His main work was on function theory and approximation theory, building on the results of Chebyshev, Zolotarev and Markov. Volodymyr Petryshyn comments that:-

His most outstanding work consisted of deep approximation results in the constructive function theory, including the solution of the problem of Zolotarev.

Boris Verkin, the founder and first director of the Institute for Low Temperature Physics and Engineering of the Academy of Sciences of Ukraine, was a specialist in experimental physics and held mathematics in high esteem. He persuaded several mathematicians including Akhiezer to join the Institute in the early 1960's and Akhiezer became head of the Department of the Theory of Functions at this Institute.

Akhiezer's later work, in addition to that on the theory of moments, included joint work with Sergei Bernstein on completeness of sets of polynomials. Akhiezer wrote 150 papers and 10 books, one of which was the important Theory of Operators in . This work, written jointly with Israel M Glazman, was first published in Russian in 1950. It was translated into English and published as two volumes, in 1961 and 1963. In 1966 the authors produced a major revision and augmentation of the text for a second Russian edition, and they produced a third edition in two volumes in 1977, 1978. This third Russian edition was translated into English and published in 1981. The two English volumes published in 1961 and 1963 were reprinted as a single volume in 1993.

He also contributed to the history of mathematics with an important book on Sergei Bernstein and his work. He also edited the collected works of Pafnuty Lvovich Chebyshev, Andrei Andreyevich Markov, Aleksandr Mikhailovich Lyapunov and Nikolay Yakovlevich Sonin.

Akhiezer was highly praised as a teacher [6]:-

He comes to his teaching with the greatest sense of responsibility, and thoroughly prepares his courses, usually in written form. He reads these lectures with great animation, infecting the audience with his unaffected enthusiasm and desire to reveal the beauty of mathematical constructions. His great personal charm, sparkling wit and cheerfulness, and his open and friendly attitude towards the young, have always attracted talented young people to Akhiezer, a great number of whom have developed into good mathematicians who are working in various cities of the USSR.

In [3] some of his other contributions are mentioned:-

Naum Il'ich had a wide range of interests, never ceased to organise mathematician teams in Kharkov Polytechnical Institute and Kharkov University. More than that, he took many far reaching initiatives to raise the new generation of mathematicians (setting up the well known 27-th mathematics school, the Kharkov State University based External youth mathematics school). His pedagogical gift and lecturer's skill were famed in Kharkov higher education institutions.

Many generations of students at the University of Kharkov heard Akhiezer's remarkable lectures and were astonished by their elegance and originality. These lectures had a significant formative influence on many mathematicians. He was gladdened by the success of young mathematicians, who always found in him a supporter. He had a brilliant and fascinating personality; his intellectual interests were unusually wide, and his energy and enthusiasm did not forsake him until the very last day.