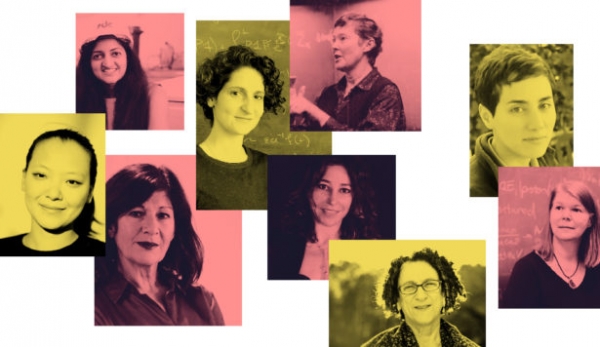 Top women in mathematics and physics discuss how they got to where they are — and why there aren’t more of them.

In an interview with Quanta Magazine last fall, the eminent theoretical physicist Helen Quinn recalled her uncertainty, as a Stanford University undergraduate in the 1960s, about whether to pursue a career in physics or become a high school teacher. “There were no women in the faculty at Stanford at that time in the physics department,” Quinn said. “I didn’t see myself there.” Her adviser warned her that “graduate schools are usually reluctant to accept women because they get married and they don’t finish.” (He kindly added that “I don’t think we need to worry about that with you.”)

In the 1970s, the Italian-American dark matter physicist Elena Aprile survived male advisers with a similar unwillingness to tolerate competing demands on her time. “It made me of titanium,” she said of her relationship with her brilliant but demanding mentor. “He would keep pushing you beyond the state that is even possible: ‘It’s all about the science; it’s all about the goal. … You have a baby to feed? Find some way.’”Four decades later, the welcome mat can still be hard to locate. “In my entire career I’ve always been aware of being a woman in physics,” the theoretical astrophysicist Katherine Freese told Quanta in 2014. When she moved to Sweden that year to head up the Nordic Institute for Theoretical Physics, she was drawn to the cultural acceptance of women in science there. “On the entire planet, as far as I can tell, the best place for a woman to do science is Scandinavia,” she said.The pipeline of women pursuing mathematics and physics is still dreadfully leaky. Because there are so few women in senior positions, aspiring researchers lack female mentors, perpetuating a sense of not belonging. In a recent interview, the French mathematician Sylvia Serfaty said that in her field “the numbers over the last 20 years are not a great improvement, sometimes even decreasing.” Serfaty, a prize-winning expert on vortex dynamics, argues that it hurts mathematics: “It’s good to have a diversity of frames of mind” when pursuing proofs, she said, “and women do tend to think a little bit differently.”

Some who achieve greatness prefer research over being a role model. The Iranian-American mathematician Maryam Mirzakhani, who became the first female Fields Medalist in 2014, told Quanta at the time that although the strength and encouragement of her female high school principal influenced her greatly, she had no desire to be the face of women in mathematics.

In addition to featuring these perspectives, Quanta has interviewed and profiled other top mathematicians and physicists who happen to be women. In honor of International Women’s Day and women everywhere, we’re sharing some of their stories here: